In order to complete this step, you need to have AWS Compute Optimizer enabled.

AWS Compute Optimizer uses machine learning to analyze the configuration and utilization data of your AWS resources. It reports whether your resources are optimal and generates recommendations (findings) to reduce the cost and improve the performance of your workloads.

When it comes to EC2 instances there are three types of findings:

If you have just installed the CloudWatch agent on your instances it may take a couple of days for AWS Compute Optimizer to start providing updated recommendations. You may not see the memory data during the first checks.

During the steps below we will review some AWS Computer Optimizer examples and how the recommendations are affected by having an additional data point from the EC2 instance memory utilization. 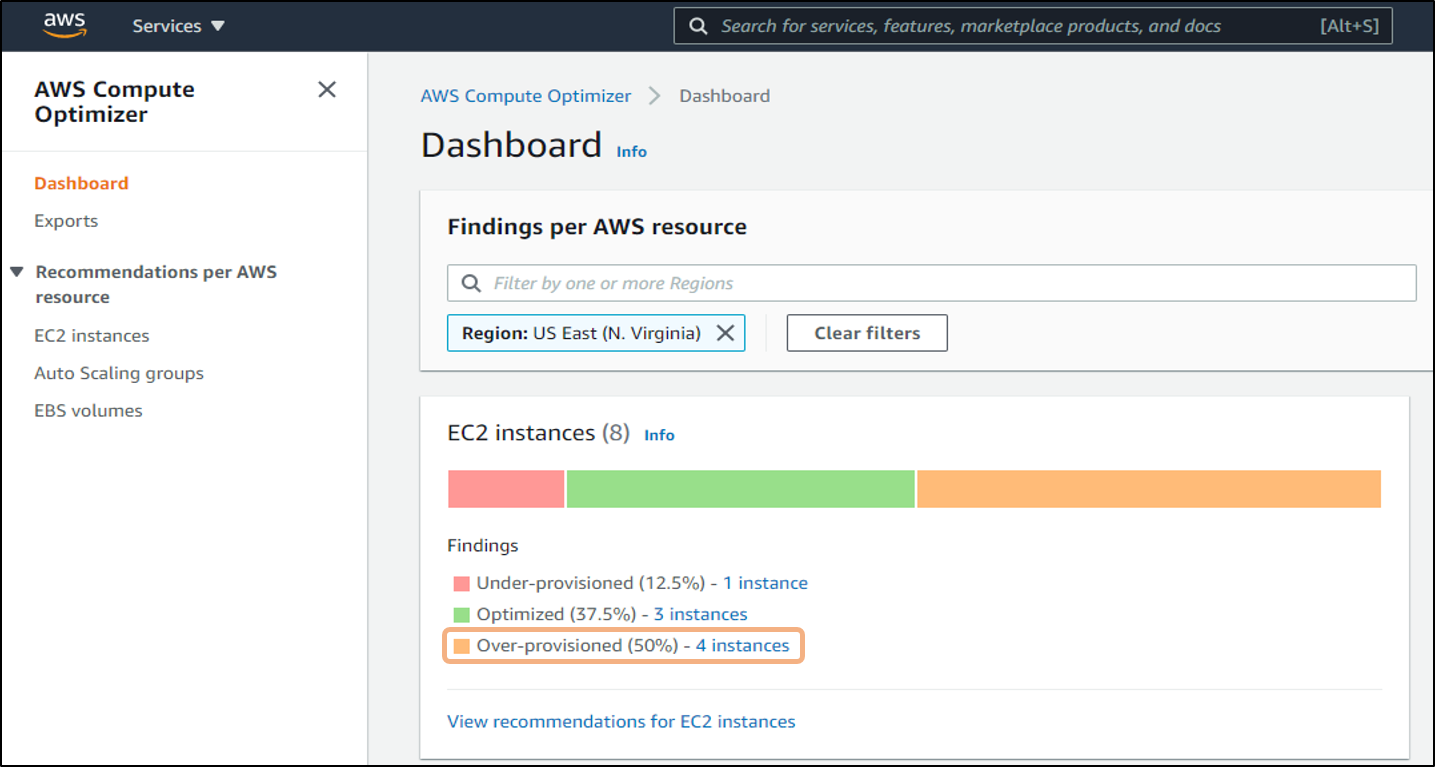 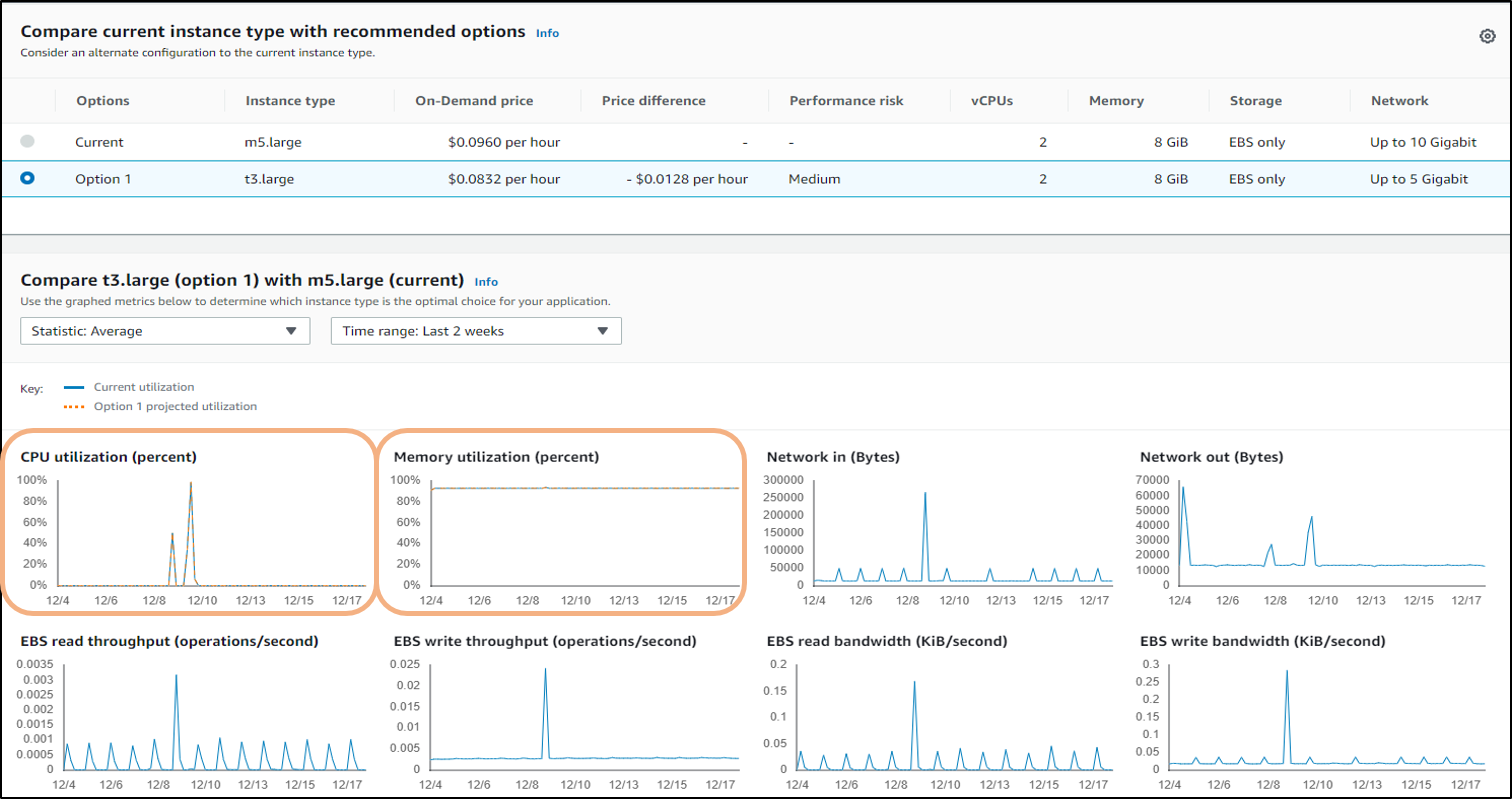 Memory utilization is consistent at 90% and downsizing to a cheaper t3.large will keep our memory at the same size (8 GiB). In other words, we can get the same memory performance while reducing overall cost.

A case could be made that this instance is under-provisioned and upsizing to an instance with more memory is a better solution. For this scenario, AWS Compute Optimizer views scaling down CPU and keeping the same memory the best decision for cost and performance. Having memory utilization enabled provides an additional data point for customers before making a final decision. 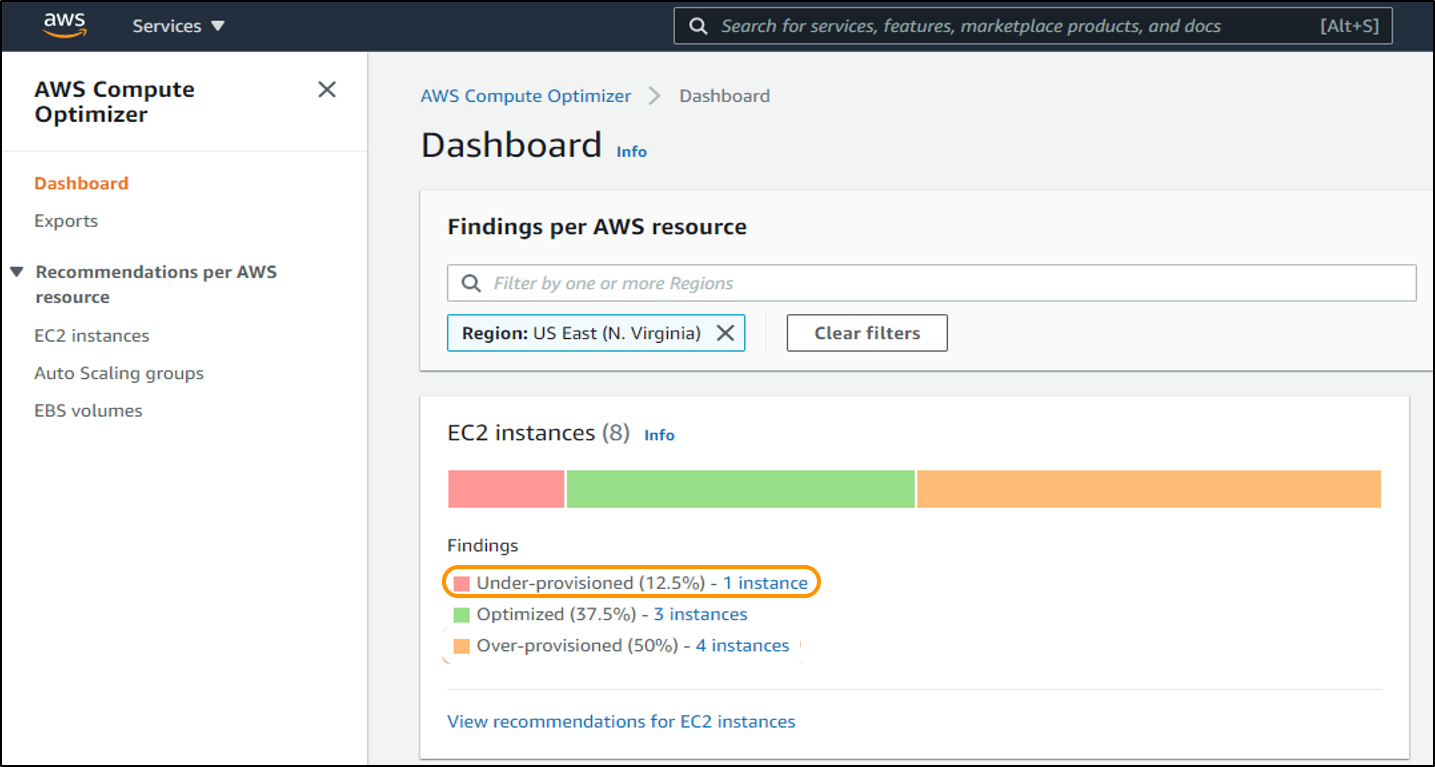 Notice there can be multiple options for rightsizing (t3.xlarge, c5.xlarge, m5.xlarge). All options are recommending we move from 2 vCPUs to 4 vCPU’s. The first option will typically be the cheapest. There are multiple columns that allow you to compare and contrast the right choice for upsizing your instance, including price, performance risk , CPU, memory, storage, and network. 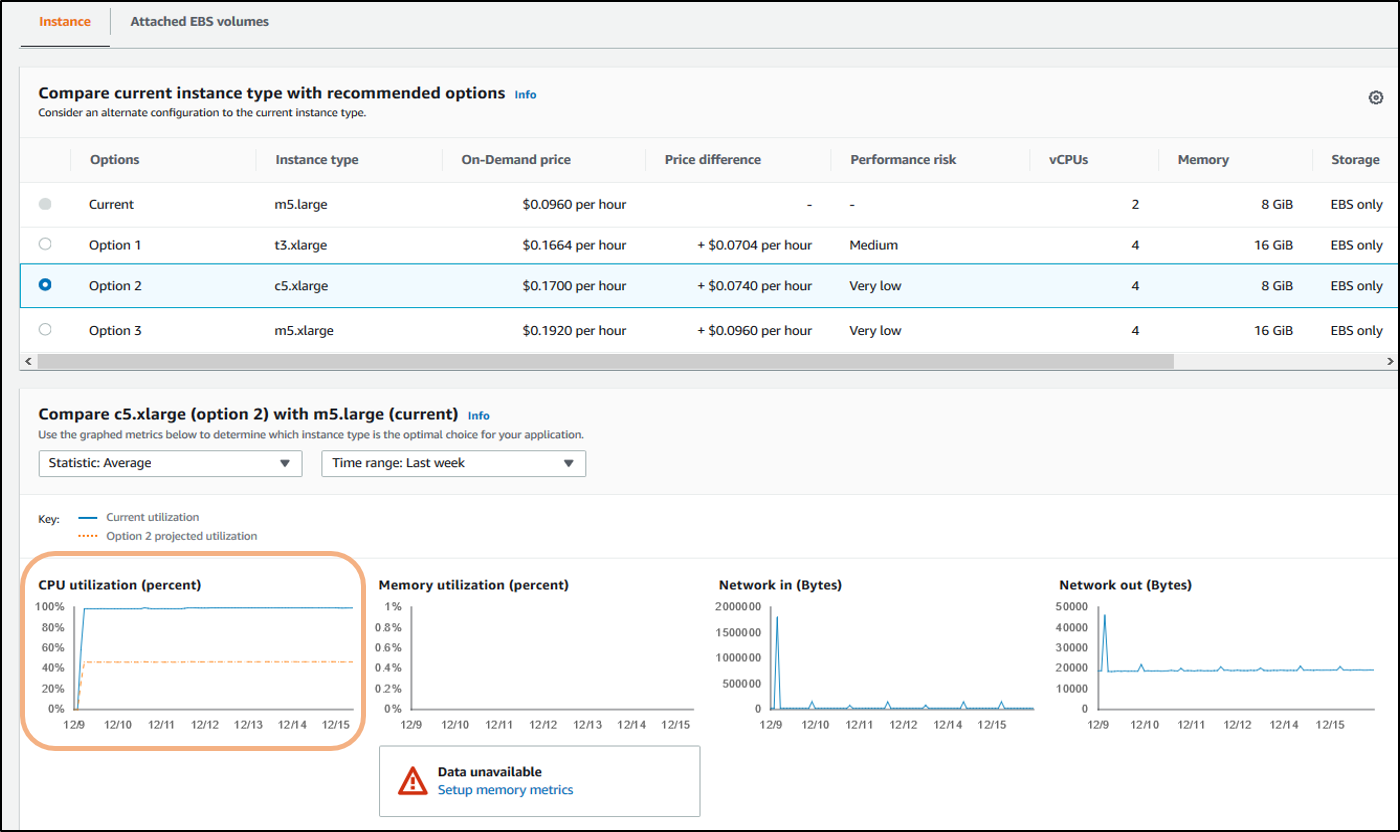 On the example above you might have noticed that memory utilization is not currently enabled on this instance, therefore AWS Compute Optimizer will not report memory utilization. This could be an important datapoint when making a decision to which instance to upsize. For example, if memory is not an issue option 2 may be a better choice than option 3 from a cost perspective. AWS Compute Optimizer will not recommend instances with lower memory if memory monitoring is not available. 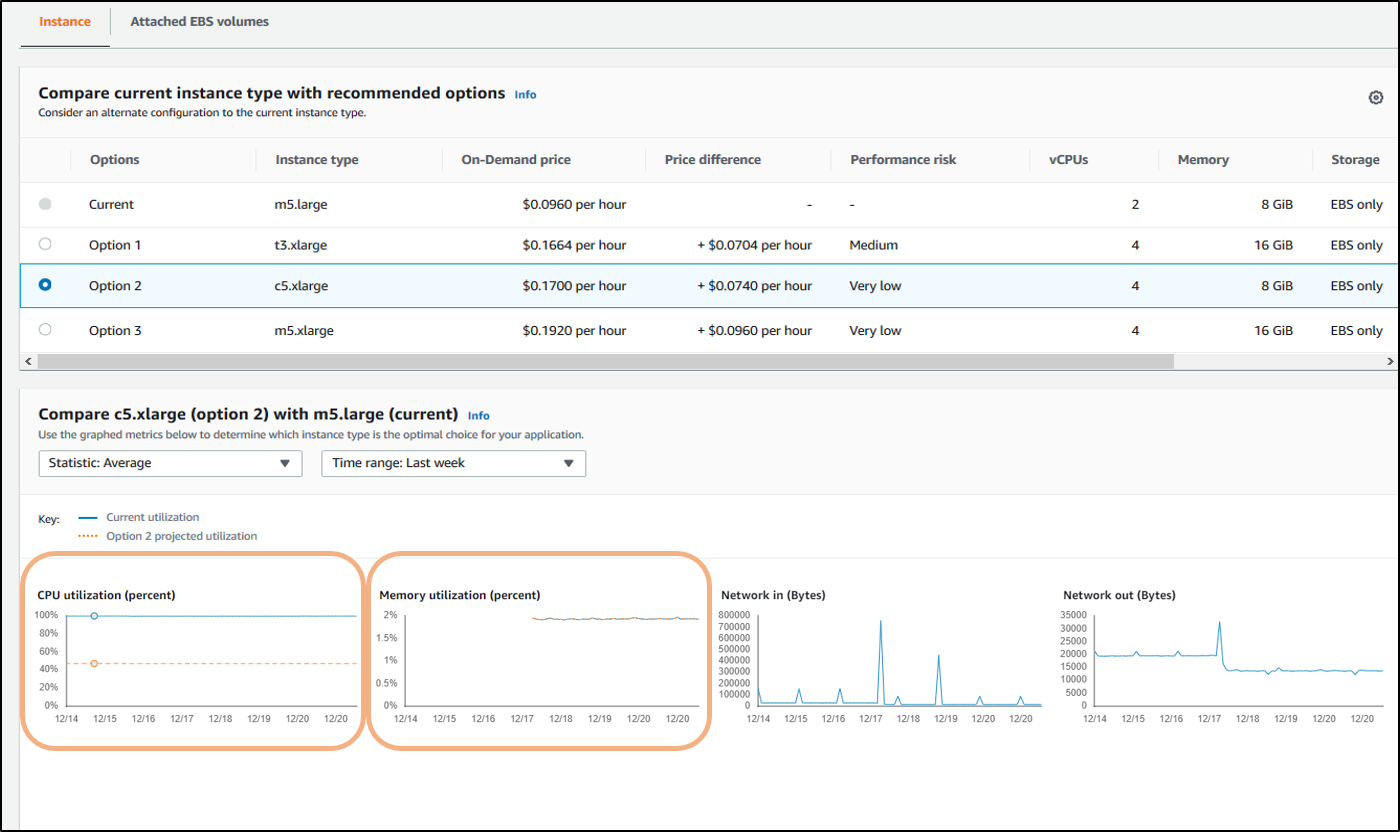 AWS Compute Optimizer will now take memory utilization into account. We can see that memory utilization is low and 8 GiB is sufficient. Choosing option 2 (c5.xlarge) will give us additional CPU power and keep our performance risk low by not having to switch to a burstable instance (t3.xlarge). Depending on your goals option 1 may be ideal for cost savings while option 2 would be ideal for overall performance and stability.