In this section, you will prepare a sample application. The application is an API hosted inside a docker container, using Amazon Elastic Compute Service (ECS). . The container is accessed via an Application Load Balancer.

The API is a private microservice within your Amazon Virtual Private Cloud (VPC) . Communication to the API can only be done privately through routes within the VPC subnet. In our lab example, the business owner has agreed to run the API over HTTP protocol to simplify the implementation.

The API has two actions available which encrypt and decrypt information. This is triggered by doing a REST POST call to the /encrypt / /decrypt methods as appropriate.

Both actions will make a write and read call to the application database hosted in Amazon Relation Database Service (RDS) , where the encrypted messages are stored.

The following step-by-step instructions will provision the application that you will use with your runbooks and playbooks .

Explore the contents of the CloudFormation script to learn more about the environment and application.

You will use this sample application as a sandbox to simulate an application performance issue, start your runbooks and playbooks to autonomously investigate and remediate.

Actions items in this section: 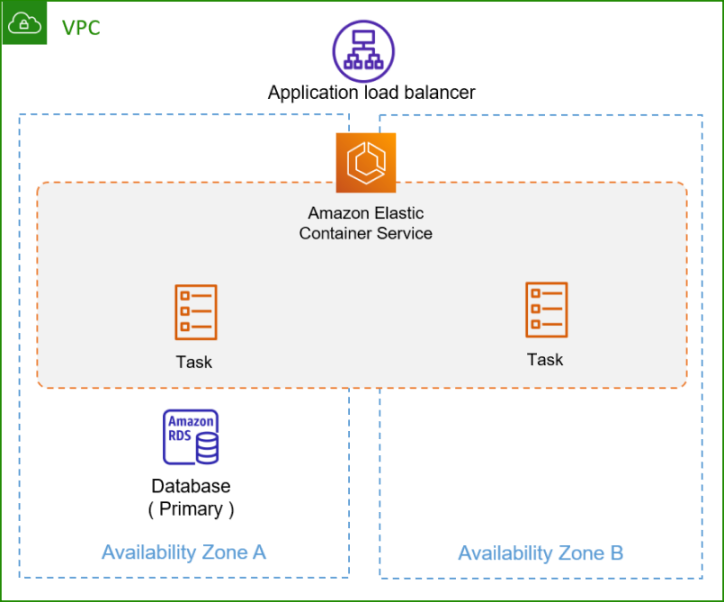 Next, run the build script to build and deploy you application environment from the Cloud9 workspace as follows:

The build_application.sh script will build and deploy your sample application, along with the architecture that hosts it. The application architecture will have capabilities to notify systems operators and owners, leveraging Amazon Simple Notification Service . You can use the same email address for sysops@domain.com and owner@domain.com if you need to, but ensure that you have both values specified.

If you have deployed Amazon ECS before in your account, you may encounter InvalidInput error with message “AWSServiceRoleForECS has been taken” while running the build_application.sh script. You can safely ignore this message, as the script will continue despite the error.

The build_application.sh will deploy the application docker image and push it to Amazon ECR . This is used by Amazon ECS. Once the build script completes, another CloudFormation stack containing the application resources (ECS, RDS, ALB, and others) will be deployed.

Once the application is successfully deployed, go to your CloudFormation console and locate the stack named walab-ops-sample-application.

There will be 2 emails sent to your address, please ensure to subscribe to both of them.

In this section, you will be testing the encrypt API action from the deployed application.

The application will take a JSON payload with Name as the identifier and Text key as the value of the secret message.

The application will encrypt the value under Text key with a designated KMS key and store the encrypted text in the RDS database with Name as the primary key.

Note: For simplicity purposes the sample application will re-use the same KMS keys for each record generated.

You have now completed the first section of the Lab.

You should have a sample application API which we will use for the remainder of the lab.

Click on Next Step to continue to the next section.